15 years of science and hope to fight multiple sclerosis

The day when the GAEM Foundation (Group Affected by Multiple Sclerosis, in its Spanish acronym) celebrated its 15th anniversary, on October 20th, was the opportunity to bring together friends, sponsors and researchers who, throughout these years, have made the dreams of a few visionaries come true.

“We exist because a group of affected patients wanted to change the way things were being done”, said in his presentation address the president of GAEM, and one of its founders, Vicens Oliver. “We wanted the state-of-the-art research, the science that could potentially be the most beneficial for patients, not to be locked away in a drawer. We wanted all that valuable work of researchers and doctors to reach us, the affected people”, Oliver explained in his emotional welcome speech. “We wanted our difficulties, our frustrations, our daily struggle to be relieved by hope. A light at the end of the tunnel that comes as a result of biomedical research”.

GAEM was actually founded on November 6, 2006: the pandemic, though, meant that the roundabout date could not be celebrated last year, and had to be postponed to 2022.

The Foundation’s firm commitment to science was at the center of the speeches by the corporate director of the CaixaResearch Institute, Àngel Font, who stressed that La Caixa’s support for GAEM stems from the fact that the Foundation has always placed quality research at the center of its action. Cristóbal Belda, director of the Carlos III Research Institute, which represents the main public funding lever for biomedical research in Spain, recalled that organizations such as GAEM are a fundamental stimulus for them to focus on patients and help direct efforts of research towards the improvement of their living conditions. “It is thanks to the input of organizations like yours,” said Belda, “that the Carlos III Institute has decided to structurally finance multiple sclerosis.”

The director of the Barcelona Science Park (PCB) Maria Terrades also recalled that GAEM was one of the first entities to settle in the PCB. “We are proud to have an organization as yours on campus: we have research centers and biotech companies; you help us to include patients in the biomedical research equation as well”.

Pablo Villoslada, associate professor at Stanford University and researcher at IDIBAPS (Hospital Clínic Barcelona) was assigned the task of explaining the state of the art of clinical research on multiple sclerosis. The treatments that are currently used against multiple sclerosis are immunomodulators capable of slowing down attacks and, therefore, the progression of the disease by reducing the autoimmune response. In this way, long-term disability can be reduced. However, these treatments are not capable of reducing either chronic inflammation or neurodegeneration, both of which are so characteristic of the disease, and, consequently, the progression and degeneration due to the pathology endure.

The research projects that GAEM has accelerated in these years – which were also presented in a video – are in line with a series of innovations that will lead to improve the diagnosis of the disease, through the early detection of biomarkers, to help the reading of neuroimaging, thanks to artificial intelligence, and to the use of personalized therapies. Intramedullary electrostimulation, one of the latest projects that have entered the GAEM accelerator, could represent a significant advance to improve the living conditions of many patients, who could recover their mobility and their control of the sphincters, if scientists are able to show that this project is effective on patients.

The prospects for 2035, according to Villoslada’s predictions, are that, by then, multiple sclerosis is a controlled neurological disease, and the majority of the most recently diagnosed patients do not have relapses and see little progression of the disease, and the others can gradually recover functionality and quality of life, while efforts will focus on preventing the disease itself, along with other autoimmune diseases.

As customary in any anniversary, two key ingredients were offered to guests: a cake – provided by the renowned Catalan pastry chef Oriol Balaguer and his chef Matteo Banci – and the cava, offered to GAEM by Martín Soler. Novartis, Teva and Alexion have generously sponsored the event.

“What do I expect from the next anniversary, 15 years from now?” asked herself Caterina Rey, one of the founders of GAEM. “Well, I want to come back here, raise another glass of cava and finally celebrate the cure of multiple sclerosis”. 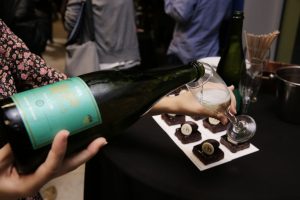 This website uses cookies to improve your experience while you navigate through the website. Out of these, the cookies that are categorized as necessary are stored on your browser as they are essential for the working of basic functionalities of the website. We also use third-party cookies that help us analyze and understand how you use this website. These cookies will be stored in your browser only with your consent. You also have the option to opt-out of these cookies. But opting out of some of these cookies may affect your browsing experience.
Necessary Always Enabled
Necessary cookies are absolutely essential for the website to function properly. These cookies ensure basic functionalities and security features of the website, anonymously.
Performance
Performance cookies are used to understand and analyze the key performance indexes of the website which helps in delivering a better user experience for the visitors.
Analytics
Analytical cookies are used to understand how visitors interact with the website. These cookies help provide information on metrics the number of visitors, bounce rate, traffic source, etc.
SAVE & ACCEPT